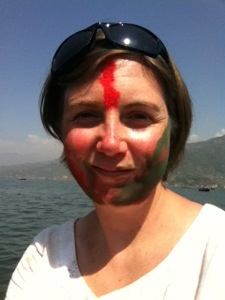 ‘Do you want to change the flights and go to the Festival in Pokhara?’ Hayley asked us last night.

We’d found out that there was a festival happening in Pokhara today and there was a chance to fly there a day earlier than planned to make it.

So, we were up at 4:45am and in Pokhara by 7am after a terrifying 20 minute flight on a 16 seater plane. Two airlines currently fly out of Jomsom, Yeti Airlines and Tara Air. Apparently more used to fly out of there until a spate of accidents a few years ago…That really filled us with confidence.

Anyway, we arrived in time for the Hindu Holi festival, or, the Festival of Colours. A spring festival, it is celebrated at the end of winter, on the last full moon day of the lunar month. Which happens to be now. As well as having religious significance, it is also a time to enjoy the colourful nature of the beginning of spring.

The colour aspect is celebrated by people throwing painted powder over each other and shouting ‘Happy Holi,’ as they do it.

You can see from the series of photos that I went from from having a couple of splashes of colour on me to being absolutely covered. I made the mistake of washing my once white top when I got back to the hotel. It is now pink with green smudges. One shop owner provided me with some towel to wipe my hands before I started looking through the clothes in his shop – sensible. 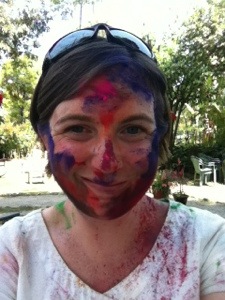 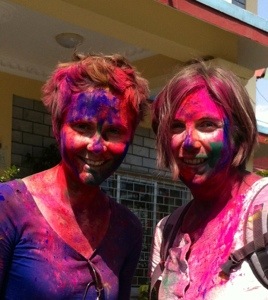 Leave a Reply to suzi