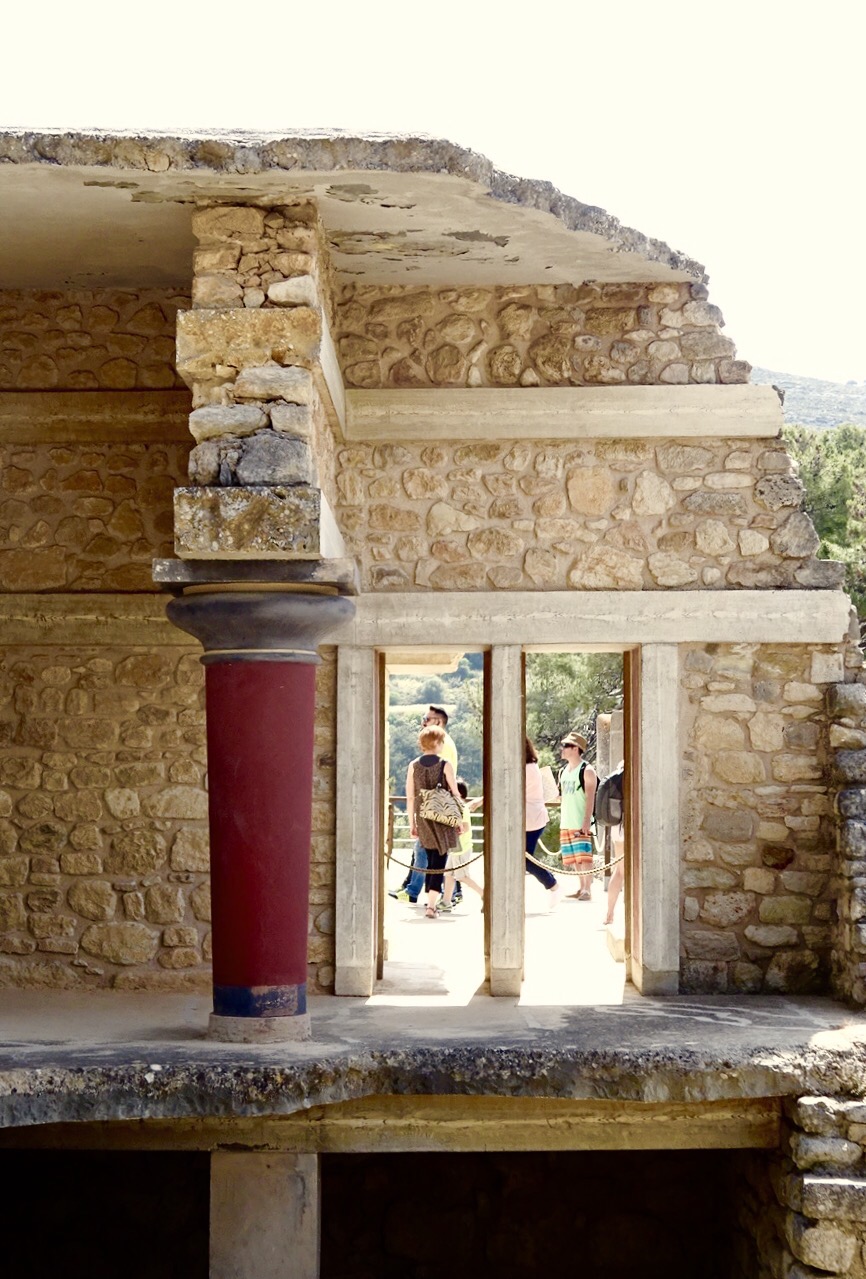 He’d pulled a lined piece of paper out of his pocket with the word ‘quern stone’ written in red gel pen. After we’d told him it was a saddle quern, he squeezed the word ‘saddle’ in front of ‘quern’, using the same red pen.

With his silver hair tied back in a pony tail, and his thick eyebrows curling like eyelashes, our guide at Malia Minoan Palace (let’s call him Malia Man), weaved a story around the site as we trod the prescribed walkways – sun burning the tops of my feet. He set the scene to Minoan Crete, with phases of palace building, earthquakes, more building and the final destruction of the sites, likely caused by fire and then being buried in ash when nearby Thera erupted. He explained the evidence from Malia, other palaces, and Akrotiri for the multiple wooden doorways that had, in his words, “vapourised with the heat from the fire”. He told us of his village, where roofs were still recently made of the same wood and rushes, also thought to have been used here; and where offerings were still made to help the harvest.

Why am I telling you this?

Going around the fabled site of Knossos this morning with two other couples and a guide, Nick kept asking me, “Are you OK?”

Was I? Well, no. I was quietly seething and didn’t trust myself to talk. So, I did the distinctly British thing and just smiled and said, “Yes, I’m fine.”

I was expecting the crowds. I was expecting Arthur Evan’s reconstructions. The first thing I wasn’t expecting was the complete lack of any explanation from our guide. I’m sure she was knowledgable, it just wasn’t obvious.

But unlike Malia Man, Knossos Woman seemed to tell us precious little about the actual evidence and how interpretations had been reached. Quite simply the word ‘because’ was missing. I wanted to know what was original, and what are the interpretations based on? I wanted the, “We think this because…”

Take the frescos for example. On some you could obviously see the pieces that had survived, and therefore how the reconstruction had developed. This was less obvious with others, and Knossos Woman did not enlighten us – unless we asked.

According to Knossos Woman, there was a fire at the end of occupation (fact, which is good). But what caused that fire? Did it destroy the site or just part of it? But, no, that was it. I found myself applying the information gleaned from Malia Man and applying it to Knossos. She did point out plenty of fire-blackened areas… In the end the palace was almost certainly destroyed by fire, but any relationship to wider events, like Myceanean activity or the colossal eruption of Thera was not even mentioned. Even if the eruption of Thera didn’t cause the site to be abandoned, it would have quite literally impacted site. When it erupted it’s thought to have been with the power of several thousand atomic bombs and been about four times larger than the 18th century eruption of Krakatoa that killed 40,000 people.

Maybe she was going for understatement and I just misunderstood.

I probably could have lived with her spiel, but the parallel litany of comments from the other people in our small group drove me to stubborn silence. They were obsessed with the Romans. I will just point out now that the Romans were on Crete at least 1,000 years after the fall of the Minoans. It’s like trying to explain Henry VIII’s actions in relation to end of the Roman Empire in Britain.

When we were told that there was no evidence for defensive structures at Knososs, the response from the group was, “So the Romans could just walk in…”. Er. No… And of course, the Romans learnt how to build roads from the Minoans too. This last one was after the group had been told about chronology.

Oh, and when tiny rooms were pointed out to us as being part of a labyrinth (despite the fact that an ‘Arthur Evans’ wall had effectively cut off the end of the room) it must be for a toilet. Or as one of our fellow guidees suggested, “They could have slept in those little rooms, like beds in dormitories”.

Are you beginning to understand why I had gone rather quiet? What do you do?

Another gem I feel I need to share was the discussion about roofs, “Well, the weather here’s not like home. So they wouldn’t have needed roofs,” Knossos Woman did step in at this point, but by this point it was too little, far too late.

The moral of this tale? Nothing particularly new, and it is something I learnt while working for the National Trust. People learn from (and incidentally buy from) people. You need to trust them. You need to build a genuine relationship with your audience. Did Knossos Woman do this? Not when you’re questioning things because you can see they are clearly wrong.

In contrast, Malia Man was passionate and he had the basics. Perhaps not everything he said was correct, but his arguments were reasoned. He used the word ‘because’. And vital for any type of interpretation, he took you on a journey. We walked the route of the processions, he pointed out the doorways and windows, showed us where oil lamps once burned, we felt the breeze that would have cooled the main royal apartments. He brought the site alive. Knossos is certainly the more impressive palace of the two, but I feel I got to know Malia.

And Malia Man was still learning. He didn’t pretend to know everything. Despite being a guide for many, many years, he was so clearly chuffed to add the ‘saddle’ to his story, ready for next time.