‘Can you pay now?’ asked the girl, just as the film was starting. She appeared to be running the show in the cinema.

We are in Manang for a few days, doing some work and also acclimatising. Snow started coming down about 3pm, so we headed to the local ‘cinema’ to see Seven Years in Tibet.

Down a little, smelly alley way, just off the street is a small, dark room. It’s about the same size as the smallest screen in Kidderminster cinema, my local. Half the room is filled with 12 wooden benches (six on each side) and the front half is empty to allow for the projection. So far, it all sounds quite normal.

The benches, which seat two people wearing bulky down jackets, are covered with dark yak hides, worn thin by the bottoms of trekkers passing through. The fur is remarkably bristly, but I suppose it has to be at this altitude.

The floor is just packed earth, with steps made from large rounded local rocks set into the dry dust, but the front half of the room has wooden boards.

Early on in the film, just when Heinrich is leaving Austria on the train, a fire is lit at the back of the room. The box that houses the projector and the DVD constantly flickers orange from then onwards. During dark scenes, like when Peter and Heinrich are attacked by bandits, massive shadows of Hayley and me are cast onto the geometrically decorated sheets that are hanging over the earth-plastered walls.

Just after Heinrich and Peter meet up again after their great escape, the girl running the cinema brings around aluminium mugs of masala tea. A warm, milky spicy tea that you would expect to be sweet, but it isn’t. Despite the fire, it’s cold – the tea is very welcome.

Next, freezer bags full of warm popcorn are handed around. The plastic bags rustle for the next ten minutes.

When we eventually leave, our feet are numb and the snow has settled. 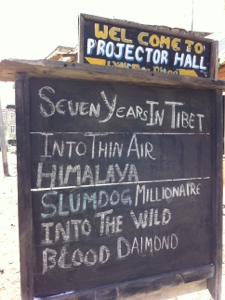