‘You should get three,’ said Jim, as he pointed out that there were sticks for sale.

We’d stopped at a stall outside a man’s house where he was selling trinkets, artefacts and other handmade bits and pieces. I was very tempted by a cow/donkey bell (they make such a pure and clear sound) and a beautiful hand-stitched green felt coat. The thought of carrying them the rest of the way dissuaded me – along with the price of the coat.

I did buy two sticks. Both made from a wood he called rusco, we’re not quite sure what it is, but going by what’s growing here and its orange colour, it must be pine or juniper.

‘If you have the sticks in your house they will protect you from snakes,’ the man told me.

So why do I need two sticks? All my others have been lost in the name of archaeology.

Stick one
This stick was kindly lent to me by Nick. Unfortunately, on the first day of the trek I got so caught up in recording rock shelters that I managed to add to the archaeology by leaving it there. By the time I realised, it was too far to go back. Sorry Nick. I will replace it.

Stick two
After borrowing Jim’s spare stick for a day, I bought another walking pole, which must have lasted me at least a week.

On the way to Pisang we came across a couple of lakes. So, after carefully tightening all the sections of my walking pole I used it to test the depth of the sediments. This worked fine for the first lake; alas, not so for the second. The clay sucked in the lower portion of the stick, never to be seen again.

Stick 3
Later the same day I borrowed Hayley’s spare pole to walk from Lower Pisang to Upper Pisang. On the way up we stopped to record an exciting find. Inevitably, all thoughts of sticks left my mind and the stick was left leaning against a dry stone wall in the sunshine. We’d planned to collect it on the way back down, but someone else found it before we did. Sorry Hayley. I will replace it.

So, I’ve been re-using Stick 2 (at a reduced height) for the last day or so, until this morning.

Jim’s suggestion of three sticks is not so ridiculous when you look at my track record…I’m hoping Sticks four and five will last me the rest of the trip. (Stick 4 is shown on the photo, with the yak head outside our tea house in Humde).

P.S. Stick two is now re-homed with Sanda, a Sherpa with us, who is planning to use it when we go over the pass. 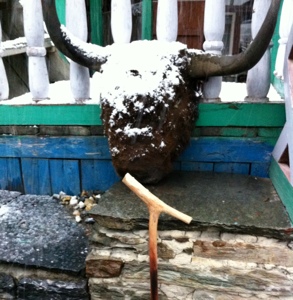