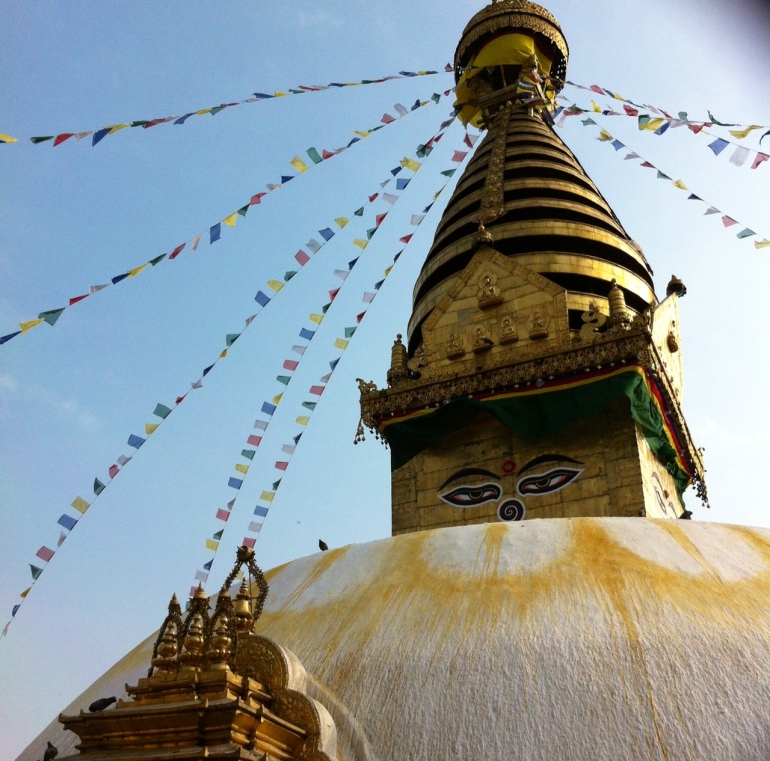 ‘We use just a single rat hair,’ said Tashi, ‘To paint the eyes.’

We are sitting holding mugs of chai tea, as Tashi Lama explains how the beautiful thangka are painted. He is master of his craft. All of the thangkas in front of us are painted in the modern art school in Kathmandu. The thangka, a Buddhist, Nepali art form dating back to the 11th century, tends to depict the lives of an important deity, a lama or Buddha. Thangkas used to serve as a vital teaching tools, especially for those who weren’t literate, but they also tell the story of historical events and myths

‘We are only allowed to paint the eyes at certain times of the day, we are told when, and it can only be after we have meditated,’ Tashi explains. ‘It needs our full concentration.,

The whole process of painting them is methodical and structured, but takes years to learn due to their highly symbolic nature. Tashi studied for six years. Although the main elements stay the same, the artist’s skill and individuality shine through in each one, especially when you compare the same scenes side-by-side.

After a morning of meetings, planning and sorting kit we had a few hours to be tourists. Guided around Kathmandu we went first to Durbar Square, the ancient square with palaces and temples all nestled together. There was a buddhist social gathering happening, the noise of the chanting and the mass of people, gave a feel for what it must be like during a festival.

Next, we went onto Swayambhunath, a religious site that overlooks Kathmandu. It is also known as the Monkey Temple, though our guide told us that the number of monkeys at the site is falling each year, I saw just three. The electricity cables appear to be partly to blame for their dwindling numbers, along with a lack of food. It was at the Monkey Temple that we met Tashi and enjoyed a cup of tea with him. 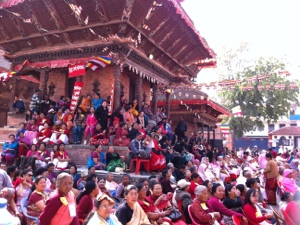